The bones of the spine are separated by tough cartilage pads called intervertebral discs (inter = “between”; vertebral = “bones of the spine”). Healthy discs are thick and flexible (like a wet sponge) allowing a wide range of bending and twisting motions. An unhealthy disc is stiff and hard (like a dry sponge) and prone to injuries such as bulging or herniation. Over time gravity, spinal joint dysfunction and accumulated trauma cause the discs to compress, flatten and degenerate. This constant compression prevents much-needed oxygen and nutrients from entering the disc. This ongoing starvation causes the once-tough outer layers of the disc to soften allowing the disc to become injured or diseased. Disc damage can occur anywhere in the spine. However, the discs of the neck (cervical spine) and low back (lumbar spine) are the most commonly injured.

Disease of the spinal discs can take many forms. Significant disc damage can lead to a Disc Bulge, become a tear called a Disc Herniation or the inner gelatinous material of the disc can leak out in the case of a Ruptured Disc. The “jelly center” of the disc can also dry out over time which is referred to as Degenerative Disk Disease. All forms of disc injury can eventually impinge on the nerves exiting the spine (“Pinched Nerve”) which can create numbness, tingling, burning or sharp pain down the arms or legs. Sharp pain originating from the back and “shooting” down the legs is often referred to as Sciatica.

The symptoms of Degenerative Disc Disease can vary widely depending on the location and severity of the condition. In

In general, the degenerated disc itself causes little to no pain. If it does cause symptoms; it often creates stiffness around the affected joints or a deep ache that is often increased with movement of the joint. However, as the joint “warms up” the pain often decreases with this same body movement.

Although the degenerated disc often causes only mild symptoms, Degenerative Disc Disease can still cause severe pain and disability in other ways. The most serious problem related to Degenerative Disk Disease is direct nerve compression. This occurs when the spinal disc becomes thinner as part of the degenerative process. This thinning, also called Disc Height Reduction, causes the space between the bones to narrow. This narrowing also makes the hole between the nerves, the foramen, smaller, as well. Neural Foraminal Narrowing causes direct bone-on-nerve compression which can create such severe and debilitating symptoms as sharp pain, burning, numbness,

This narrowing also makes the hole between the nerves, the foramen, smaller, as well. Neural Foraminal Narrowing causes direct bone-on-nerve compression which can create such severe and debilitating symptoms as sharp pain, burning, numbness, tingling, and muscle weakness. Over time this degenerative process can compromise the integrity of the nerve to the point that the organs controlled by these nerves can become diseased. Therefore, the most disconcerting problems associated Degenerative Disk Disease are not due to the disc itself, but how the disc degeneration causes the nerves to become injured as a result.

After diagnosing the cause of the condition, a chiropractor can teach you how to help your body heal itself…

Disease of the spinal discs can take many forms. Significant disc damage can lead to a Disc Bulge, become a tear called a Disc Herniation…

When the joints of the feet fail to absorb the shock of running, the muscles of the legs, hips, pelvis and low back are often forced… 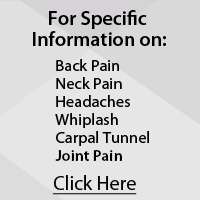